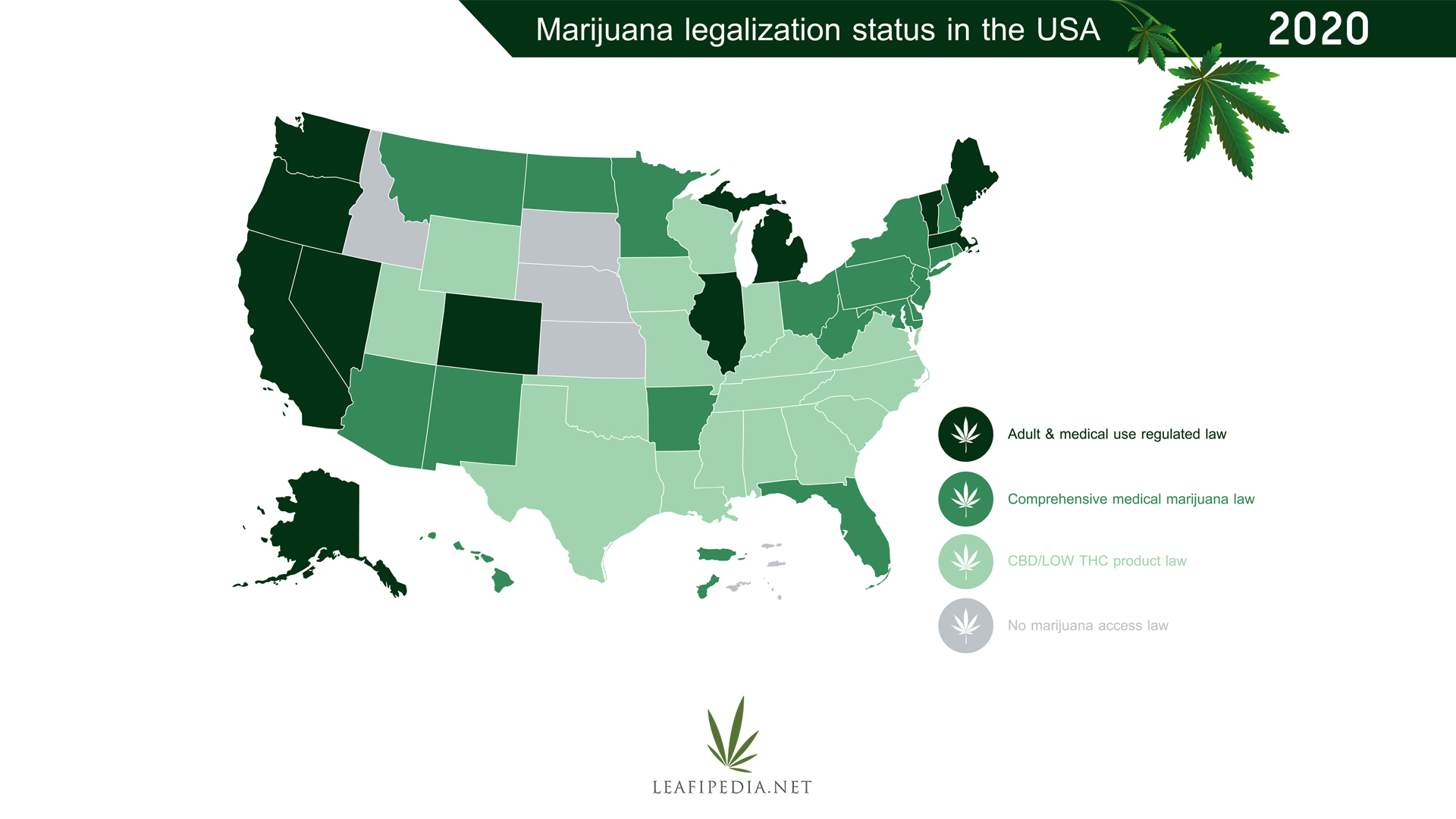 In this article we will be exploring which U.S. states have fully allowed for the use of recreational  marijuana. Currently, 11 of the 50 states are fully legalized and with the legal cannabis market showing to be worth $13.6 million for 2019 more states are sure to follow. Many states are looking to legalize marijuana because of how much tax revenue this industry can bring in which can be used to fund other departments such as healthcare and education. This industry was also able to provide a boost in the economy by creating 64,000 jobs in 2018.

So you’re wondering which states exactly have legalized cannabis for recreational use? This guide will help anyone who is unfamiliar with the laws where cannabis is legal. Also learn about the massive tax revenue gains for some of these legalized states.

Cannabis has been fully legal in the state of California since 2016 with the passing of Proposition 64. In 2019 California brought in $629.3 million in tax revenue with it’s 15% excise tax and 2.75 billion in overall marijuana sales. Residents of the state must still abide by certain laws such as the possession of up to 28.5 grams of cannabis flower and 8 grams of concentrate is permitted by California’s pot laws .

Alaska cannabis laws state that adults 21 or older are allowed to carry up to one ounce of marijuana at a given time. Individuals are also allowed to own and grow up to 6 cannabis plants in a safe and secure location away from the public eye. Alaska’s cannabis industry made $22.1 million in 2019 from cannabis taxes.

Recreational marijuana use was legalized in 2012 for the state of Colorado and $302.4 million was earned from tax revenue in 2019 with an overall tax revenue of $1.21 billion since 2012.

As the years have gone by Colorado’s cannabis tourism has gone up substantially, and the state’s cannabis sales have brought in over $1.56 billion. To get an in depth review of the state’s laws visit  Colorado cannabis laws.

Washington was the second U.S. state to legalize recreational marijuana following Colorado and as a result the state is highly popular for cannabis tourism. Washington’s weed laws differ for recreational and medical users, for instance recreational users may possess up to 1 ounce of pot while medical users have an 8 ounce limit. Washington charges all cannabis consumers a 37% excise tax which was able to bring in $1.33 billion in tax revenue over the years.

Medical and recreational weed sales in Oregon are subject to a 17% retail tax which has put Oregon’s overall tax revenue to $275.2 million. Oregon’s laws for possession of cannabis state that adults of legal age may possess up to one ounce of flower while in public along with:

Individuals can possess up to eight ounces of cannabis flower at their place of residence while the limits for other forms stay the same as while in public. Additionally, the cultivation of up to four cannabis plants is allowed as long as the plants are kept in a secure location away from the public eye.

Nevada has legalized both medical and recreational use of marijuana since 2016, allowing for the possession and cultivation of the plant. Residents of Nevada can own up to an ounce of weed for recreational use and up to 2.5 ounces if they are a medical patient. The use of marijuana in public is illegal and can lead an individual to a fine, jail time, or both. In 2019 alone Nevada brought in $99.2 million in cannabis sale taxes.

Illinois has recently legalized the use of recreational cannabis with the signing of a bill in June 2019 that would allow for retail sales beginning January 1, 2020. Individuals are allowed to have up to:

It is still illegal to smoke while in public and while driving.

The state of Illinois has already brought in $91.1 million in marijuana sales and $10.5 million in cannabis taxes since the beginning of the year when retail sales first launched.

Although recreational cannabis use has been legal since 2018, Michigan has only allowed for legal marijuana sales beginning in December of 2019. This U.S. state has brought in $33 million in sale totals for medical marijuana along with $112,000 in tax revenue. As for the state’s marijuana laws, residents of Michigan are permitted to own up to 10 ounces of cannabis at their home and up to 12 cannabis plants for cultivation.

Maine is another U.S state that allows for the medical and recreational use of marijuana by consumers. Maine’s medical cannabis industry brought in $111.6 million in tax revenue in 2019 and is the third largest industry in the state following lobsters and potatoes, this revenue was a huge contributing factor in the legalization of recreational pot. Maine still has fixed laws about the possession, cultivation, and consumption of this plant. Individuals 21 or older are permitted to own up to 2.5 ounces of cannabis at a given time. In addition, they can grow up to 3 mature cannabis plants along with 12 immature plants kept hidden on private property. It is still illegal to consume pot in public, and doing so can lead you with a fine worth up to $100.

Recreational weed is fully legalized in the state of Massachusetts nevertheless there are still laws consumers must follow. Adults can possess up to ten ounces of pot at their place of residence and Massachusetts weed laws also allow for up to six marijuana plants to be cultivated at a time. You cannot drive while under the influence of cannabis it’s illegal and is considered a misdemeanor. An estimated $393.7 million were made in marijuana sales just in the year of 2019.

Vermont is the ninth state in the U.S. to legalize the recreational use of cannabis in the year of 2018. Individuals in this state can own up to an ounce of pot and up to 5 grams of concentrate. Furthermore the cultivation of up to two mature plants along with four immature marijauana plants is permitted by Vermont’s weed laws. As of right now there is no concrete data on Vermont’s cannabis sales.

We will frequently update the laws for states where cannabis is legal here to ensure accuracy. Last update completed on July.23.2020.