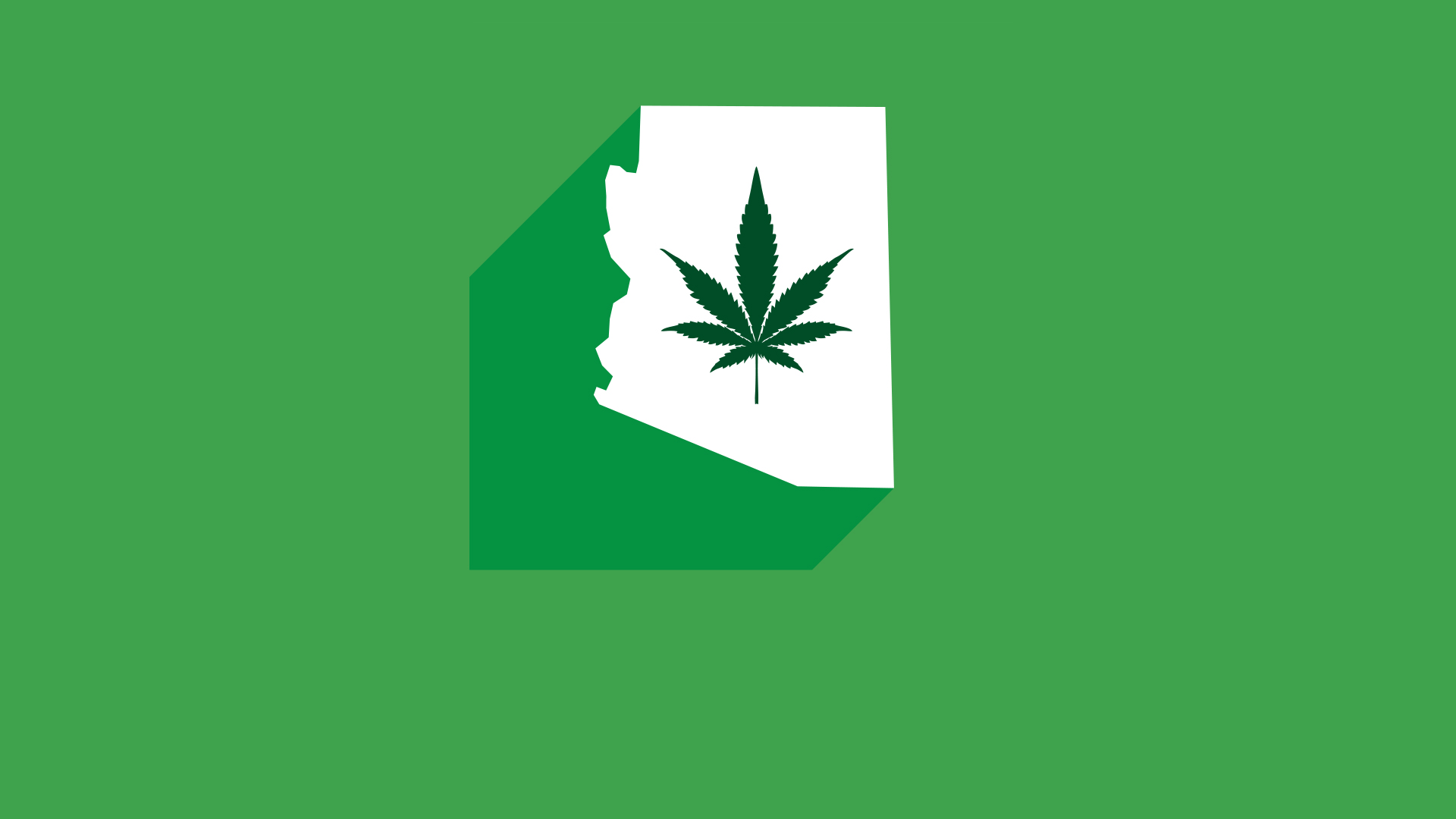 Is weed legal in Arizona? The Arizona cannabis laws are undoubtedly some of the harshest simply because the penalties for possession, use, and cultivation are quite hefty. Under state law recreational cannabis remains to be illegal, while medical marijuana is legal for qualifying patients. That being said, 2020 shows to be a promising year for the state when it comes to legalizing recreational pot!

Arizona weed laws indicate that medical marijuana remains to be legal for qualifying patients. If a patient is diagnosed with a debilitating condition and has received a physician’s approval then they can legally possess 2.5 ounces of medical pot. We gave a call to the dispensary Natures Medicines in Arizona, and was informed the limit for edibles is unlimited! Of course, this is only for medical Patients registered in Arizona. The limit for cannabis concentrate possession in Arizona is 2.5 ounces, which is much higher than most states for medical use.

Now the state has some strict regulations when it comes to at-home cultivation! Under Arizona medical marijuana laws a patient can only cultivate their own marijuana if they live greater than 25 miles away from a state-licensed dispensary. A patient can cultivate no more than 12 cannabis plants and all cannabis plants must be out of view from the public.

Getting approved for medical marijuana is no easy task!

Now, if a disease is chronic or debilitating and causes any of the following symptoms (See below), then it is considered qualified for medical marijuana.

A disease which causes

A physician must then sign a certificate provided by the Arizona Department of Health Services. This certificate must be submitted to health services when a patient applied for a medical marijuana ID card.

Once you receive the signed medical marijuana certification from your physician, you will need to apply online for a medical marijuana ID card. The application fee is $150 and if approved your ID card will be valid for 2 years.  But, before you do so, you’ll need to:

How To Get An Arizona Medical Marijuana ID 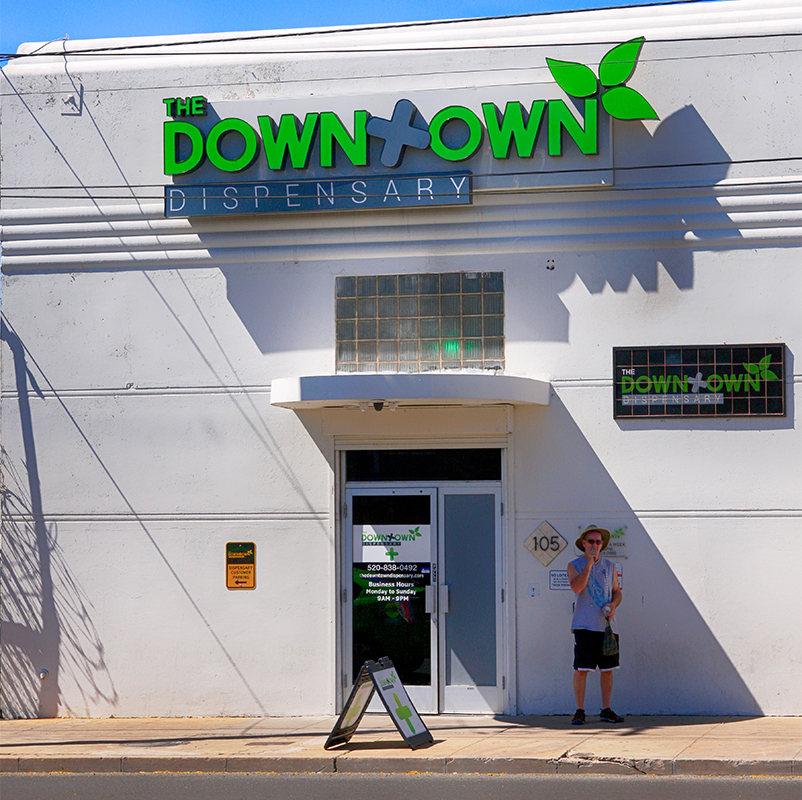 Only Medical Marijuana is legalized in Arizona as of 2020. Above is the Downtown Dispensary located in Tucson Arizona.

If you believe you have a debilitating condition that could benefit from medical marijuana then the next step is to visit a physician. A licensed physician must confirm or make a diagnosis indicating that a patient does have a qualifying condition that has been defined in the A.R.S 36-2801. The physician must explain to the patient any risks associated with medical marijuana use.

Breaking Arizona Pot Laws can have some Penalties!

Arizona pot laws have not yet legalized recreational cannabis! So, it comes with no surprise when we say that the penalties for possession, use, and cultivation can be quite harsh! Let’s break down some of the penalties for breaking the law.

Students who are caught possessing and using marijuana are at risk of getting booked into their local County jail. According to one attorney’s website, many students often get caught for possession of marijuana paraphernalia and marijuana possession.

Now, not all hope is lost! First time offending students can apply for a diversion whereby a student must accept a conditional guilty plea. The diversion program requires students to partake in drug and/or alcohol education programs for a given time period.

If the Arizona weed law, Smart & Safe Act, does have a section 36-2862 which specifically addresses those who were previously convicted on marijuana possession and use. Under this provision, if a person was incarcerated or charged a fine for recreational marijuana use, possession, etc.

Then the Smart & Safe Arizona Act would petition the court to expunge these crimes as of July 12, 2021.  Now, if a person is currently pending charges for possession and use of recreational, then this too may be expunged before July 12, 2021.

We Aren’t There Yet: Is Pot Legal in Arizona?

Clearly Arizona citizens strongly support marijuana for recreational use. So we do hope that the ballot initiative does get approved, hence making recreational marijuana legal in Arizona.

The Arizona Weed Laws which Could Legalize Recreational Use In 2021!

Worry not fellow cannabis enthusiasts, Arizona cannabis laws are showing promising changes. A new initiative to legalize recreational weed is very likely to appear on the state’s ballot on November 3, 2020. Over 420,000 signatures were collected, all in approval of Smart and Safe Marijuana laws!

The ballot initiative titled Arizona Marijuana Legalization Initiative would actively legalize recreational use and possession of marijuana for adults. Specifically, the ballot proposes laws similar to other states where recreational weed has been legalized! Take Oregon and Colorado for example!

On the ballot initiative, it states that the Arizona Department of Health and Human Services would take responsibility for not only regulating recreational marijuana, but also all aspects of licensing. This includes a tight regulation on licensing cultivation and production facilities, as well as retail stores.

Finally, it is important to mention that cannabis is still illegal under US federal law. That being said, with its legalization in Arizona an employer or property owner can prohibit the use of recreational marijuana at their private residence and at their workplace.

The ballot initiative proposed is strongly supported by over 420k signatures. With the legalization of recreational marijuana in Arizona, a tax of 16% would be placed on all marijuana sales.

But, where would your tax money go?

With the legalization of recreational pot, the state is predicting that pot sales could generate a new line of revenue. The revenue generated from the 16% tax would fund public health programs, road and highway maintenance, municipal police and fire departments, and even community colleges. It’s estimated that marijuana sales would generate a total of $3 billion within the first 10 years of legalization.