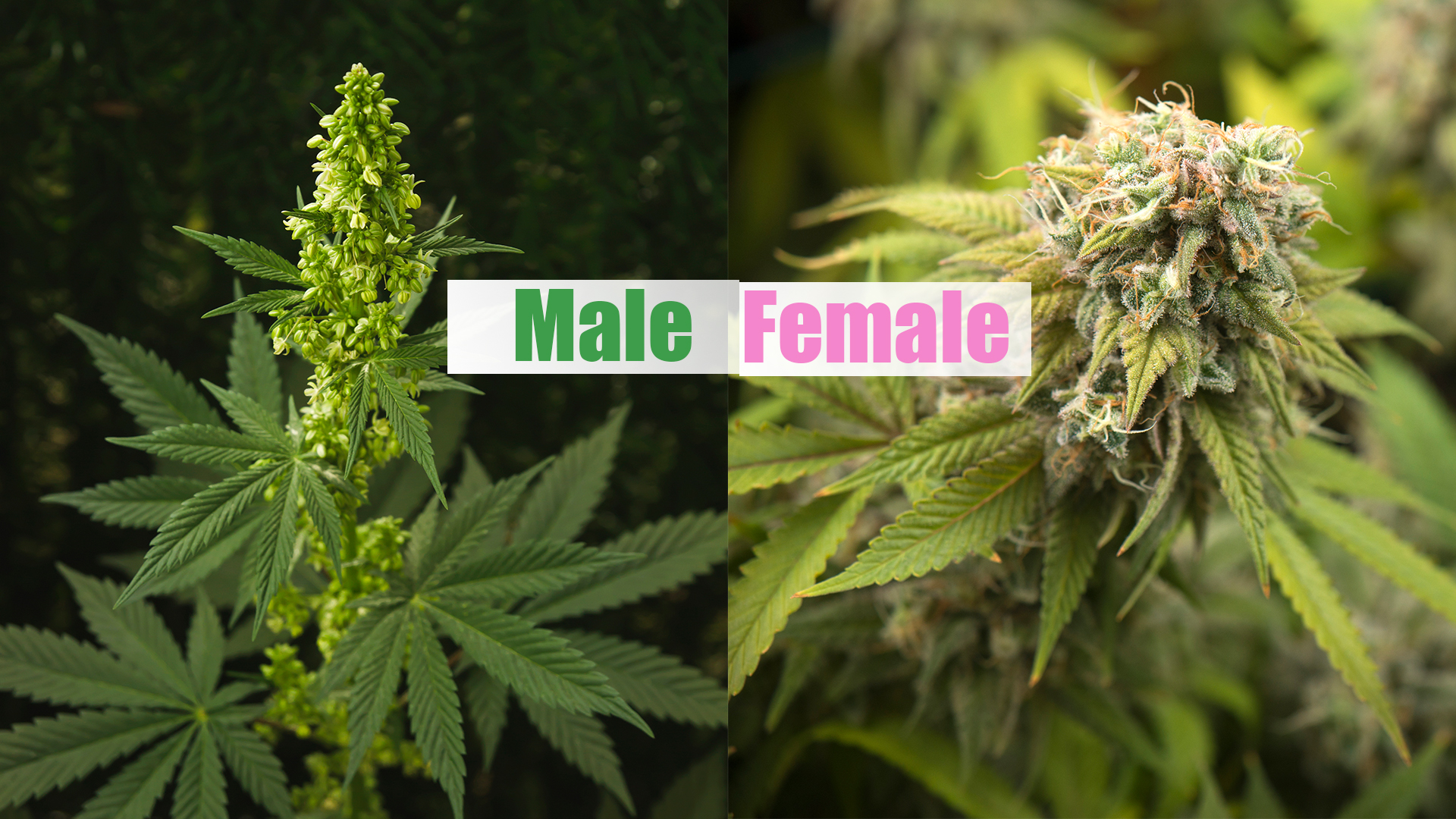 Learn how to distinguish a male vs female cannabis plant with our visual guide. After you learn how to tell the difference between a female and cannabis plant, we show you an easy to follow sexing guide. Cannabis plants have evolved tremendously due to years and years of breeding by weed growers. Advantageously, this resulted in various strains with unique and specific characteristics. Whether the plant produces more THC or CBD, resistant to pests and mold, have various desirable flavors etc., the primary focus for the growers was to improve the likelihood of female cannabis plants because they are commercially more profitable. Why? Female cannabis plants can produce large THC-filled buds, are easier to maintain, more seed yield and has a higher market seed value.

Dioecy is important when cultivating cannabis. Firstly, lets define “Dioecious” or “Dioecy”. Dioecious species have distinct male and female individuals, each with a distinct male or female flower. Cannabis plants are dioecious, compared to most of the plant kingdom. There are a few crops such as asparagus and spinach that are also dioecious but does not follow the same “pattern” per se as Cannabis plants. One problem that arises economically with Cannabis plants is the case of the “hermaphrodites” species. There are instances when your plant might produce both male and female flower parts. This in turn might not be the most suitable when looking at it in a commercial perspective. 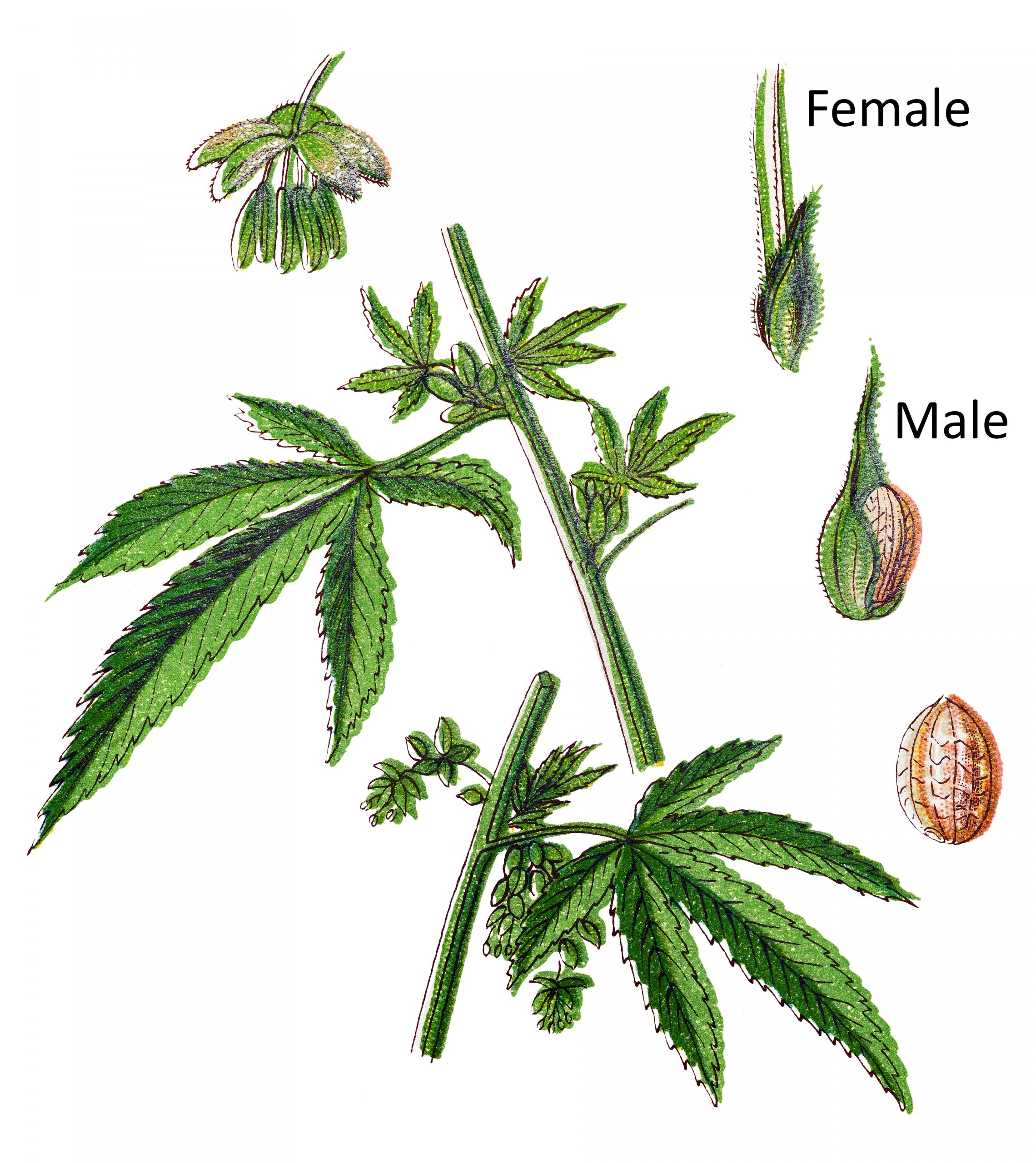 Male vs female cannabis before flowering

Is your cannabis plant a male or a female? There are some appearances you can look out for that can tell you what gender your plant is. Firstly, it is important to understand the basic cannabis plant structures: nodes, pollen sac, pre-flowers and stigma. Nodes are where the leaves and branches branch out from the main stem of the plant. Pollen sac is considered the male reproductive part to enable seed spread whereas the stigma is the female reproductive part that is required to catch the pollen. Pollen sac and the stigma are considered “pre-flowers”. Pre-flowers are noticeable within four weeks into growth, but sometimes might take longer depending on the environmental conditions. These pre-flowers are very small, so it may be a bit hard to see. But if you look up close near the nodes, if it’s a male weed, you should be able to see small sacs. However, if your plant is a female, you will notice two bracts, which will eventually produce the hair-like stigma.

Science: There are other ways male and female plants can be determined. In the biotech labs, male and female identification can happen easily via DNA extractions and a PCR reaction. We won’t get into much detail of the standard operating procedure (SOP) but there are published markers such as the MADC2 (Mandolino et. al 1998) that can be used to detect male and/or female plants at the seedling stages. On a side note, there are many problems associated with this marker. Companies like Medicinal Genomics for example, have stopped using this marker as it can give variable results, not as specific and can’t distinguish well between hermaphrodites and females. Many cannabis companies are competing to find the best marker associated with gender detection at an early plant stage, but as of date, there hasn’t been a good marker identified…that is public and not patented.

What To Do With Male Pot Plants? 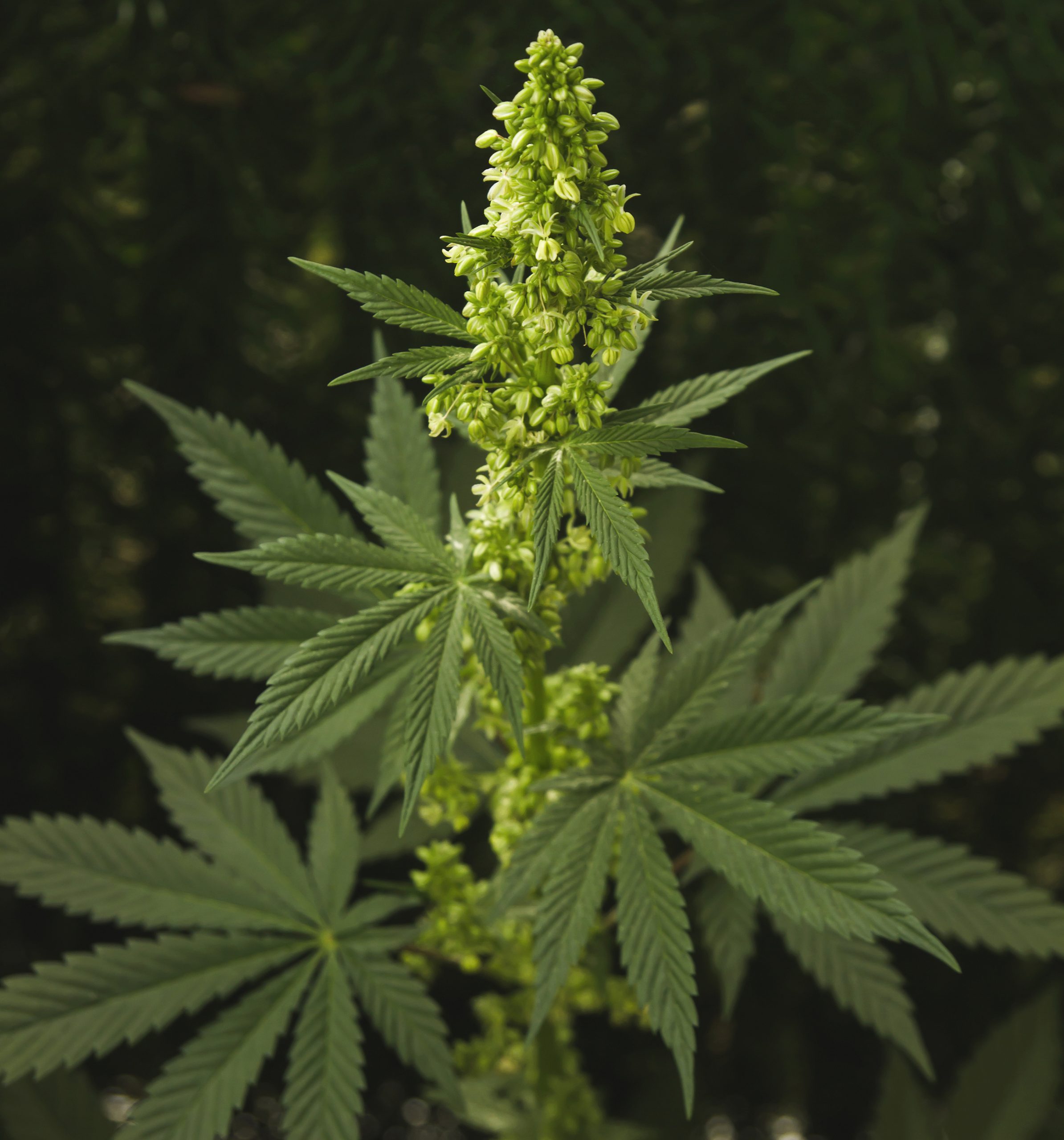 In a commercial standpoint, female cannabis plants can be more useful than male marijuana. Why? The female plants are the ones that produce the buds that you smoke. So commercially, the female cannabis plants are the ones grown in facilities and the males are discarded as soon as they are identified. It has been suggested by growers that when a male plant is identified it should rapidly be thrown away because if these plants happen to pollinate the females, the females will lose the abundant THC that is produced. However, with support from various studies, it has been shown that male weed plants can also be very useful. Here are a few beneficial purposes below:

How To Breed With Male Marijuana Plants

There are a few key points to keep in mind when choosing your male species:

What Are Hermaphrodite Cannabis plants? 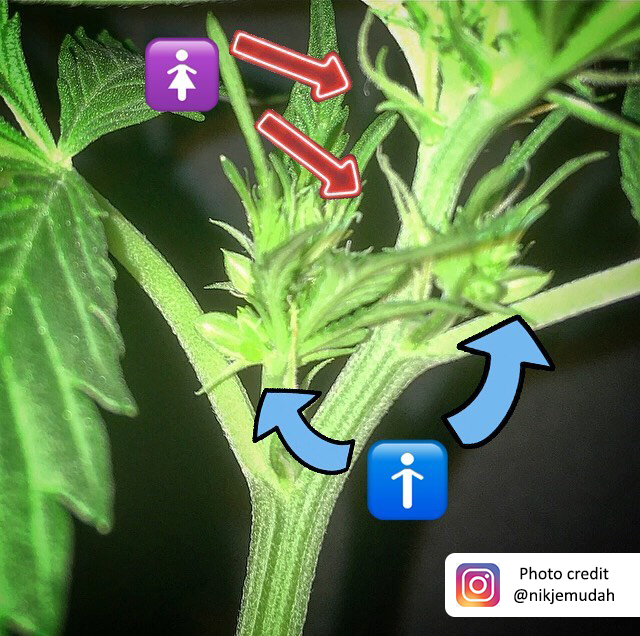 Hermaphroditism in a plant occurs when it has both male and female flower parts. This phenomenon is common in nature and the reason is as follows: the genetic inheritance and environmental stimuli. In terms of genetics, there isn’t much you can do to prevent it, but by buying seeds from a reliable source that ensures quality and stabilized genetics will reduce your chances of getting a hermaphrodite weed.

Environmental stress is a very important factor that can cause hermaphroditism. Stress can be developed when there is a lack of suitable lighting, correct time for pruning, irregular watering, transplantations etc. This makes sense from a plants perspective. If the plant thinks that it will have a short flowering time, it will counter act and will use its energy to produce male flowers so that they can pollinate with the females within that short time. At the end of the day, reproduction is natures “go-to” in maintaining the species population.

Here are some environmental stresses to think about:

Hermaphrodite plants or hermies look more like a female plant once it reaches its adulthood. These plants itself will be smaller than it’s females and male counter parts. Additionally, the flowers of these hermies will have produced many seeds and can be noticeable outside of the flower bud. So now you might think is hermaphrodite weed “smoke-able”? Yes, but ideally not preferred. Your weed will be filled with seeds that can affect the overall taste and smokability. 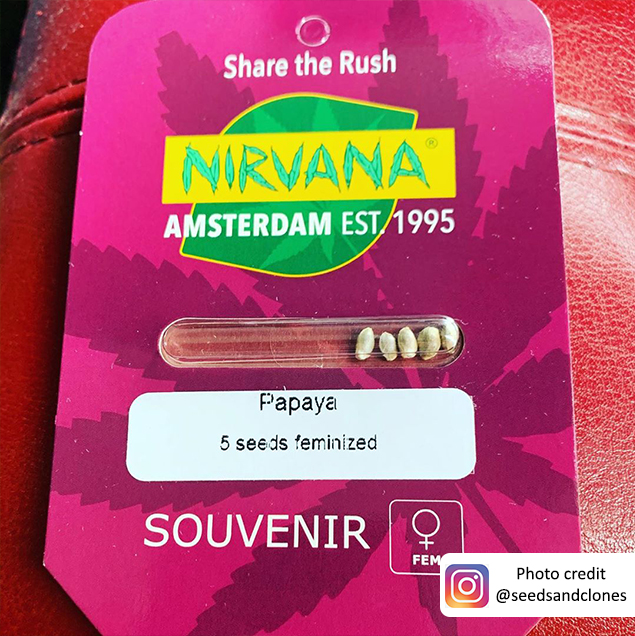 I am sure you have come across the term “feminized seeds” one point or another, when purchasing cannabis seeds. What does this even mean? Feminized seeds are seeds that have been induced in a way that guarantees that your seeds will germinate into female plants. This being said, sometimes it’s possible your seed batch you purchased, might have a loner “male” seed, although stated otherwise. At this point, you can’t blame your source since it’s really hard to tell whether your plant will be a male or a female at the seed stage. However, as you start to grow your plants from seeds, there are some appearances you can look out for to distinguish between a male plant and a female plant.

Okay, so after reading our male vs female cannabis guide you should understand how to identify the sex of this plant. 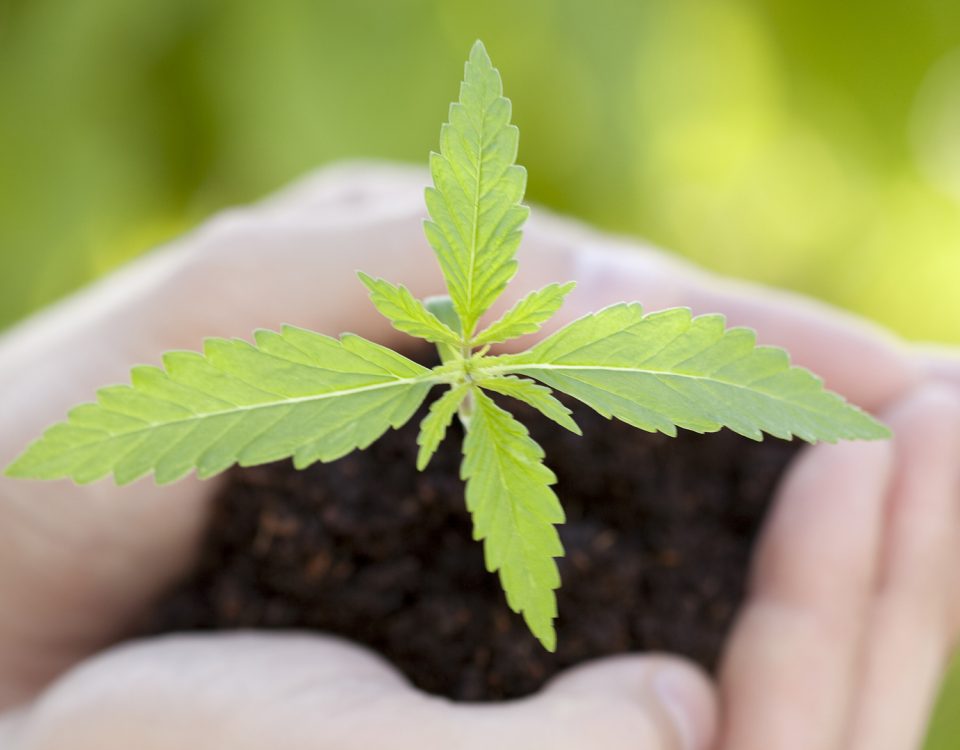 How Long Does it Take to Grow Weed Indoors and Outdoors?